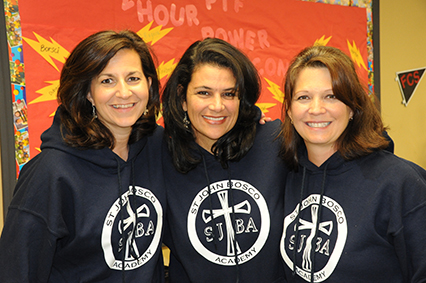 MRS. VIVIAN FERRARI, founding board member and Director of Operations

Mrs. Ferrari graduated from Georgia State University College of Arts and Sciences with a Bachelor of Fine Arts in Commercial Interior Design. After working in the design field for seven years specializing in commercial interior design and space planning, she became a sales representative for Steelcase, Inc. calling on commercial architects and interior designers. Vivian and her husband, Anthony, have 6 children. After being involved in a variety of Catholic schools for their children, they became passionate about the role of the family in Catholic education.

MRS. JULIE WILBORN, founding board member and Director of Finance

Julie attended the University of Georgia and received a B.B.A. degree with a major in Accounting. Her love of family and home education began when she felt called to home school her first child in 1996. Mrs. Wilborn has served on the board of the Center for Family Development and the Catholic Home Educators of Georgia. She has spoken on various marriage and family related topics at national and local levels over the last several years. She and her husband, Rymon, have seven children and 1 grandchild.

MRS. KIM McDONALD, founding board member and Director of Curriculum and Assessments

Kim has been actively involved in education since she began homeschooling her oldest daughter, Katelyn, over 20 years ago. Mrs. McDonald served on the Board of Directors of Catholic Home Educators of Georgia, and is an avid proponent of classical education. She has spoken at conferences and trainings on classical methodology, including the Charlotte Mason method as well as the classical trivium. Kim has 5 children and 6 grandchildren.